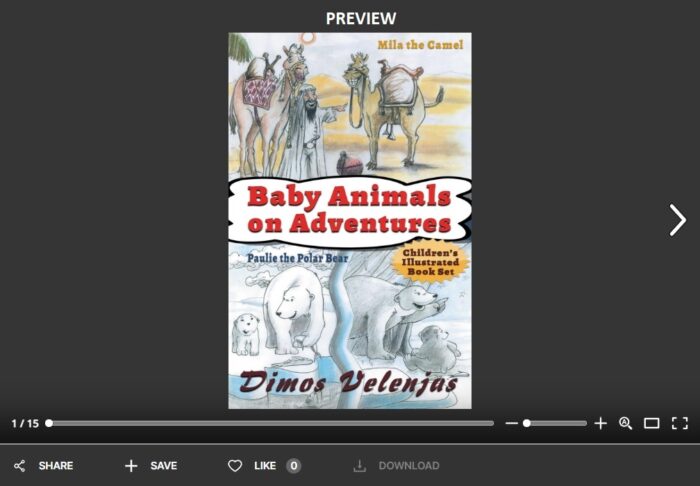 Two exciting adventures for children 7+.
Two stories that shows the power that liesin the acceptance of ourselves, as they are. The power that is hidden in the help of a friend, the time you just need it.
That will help our young friends gain knowledge –and havethe first images in their minds- about the wild environment, about the animals that live there, and their physiology. The peculiarities of each species, that allow them to be able to live and survive in there natural environment.
A children’s book set that will reveal the power of love and compassion!
The power of rebellion and responsibility!
Of lightness and admonition!
Of error and reparation! 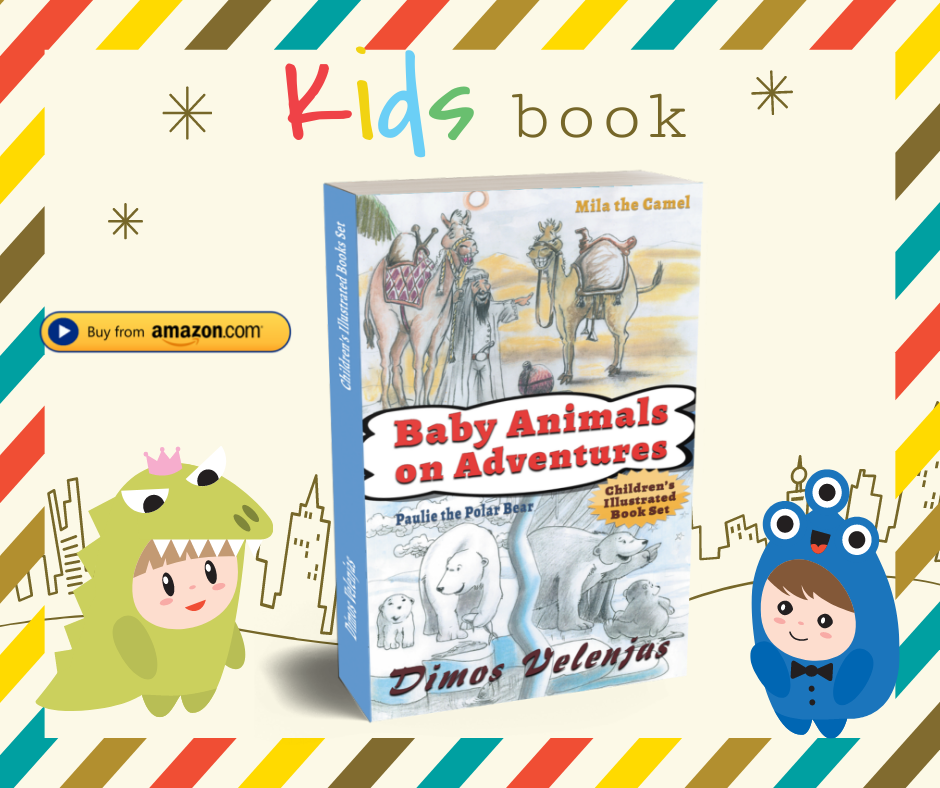 MILA – THE STORY:
Once upon a time, somewhere in the far Egypt, at a caravan, lived a little camel named Mila. From the time Mila was born, she was filled with admiration for the horses in the caravan. She admired their beauty, built, vigor as well as their agility. As the years went by, Mila grew, and as she grew, she felt more and more aversion for her own species while her admiration for the divine horses grew even further. Her aversion was such that she began to believe that she isn’t an ugly, sluggish and weak camel. So she started to keep company with the horses rather than the other camels.
The horses really enjoyed her company too. One day, one of the horses, jokingly said to her: “My dearest Mila, you may have the appearance of a camel, but your soul is of a horse”. That was it!!

From that moment, Mila was obsessed with the idea. She sincerely believed that she is actually a poor horse, imprisoned in the body of a camel. For this reason, she lived with the horses. She started to act and move like a horse. She was even taught to neigh like a horse. After a while, the other camels didn’t want Mila near them since the only reason she would come close to them in the first place, was to laugh at them  or to criticize their ugliness and weakness.
Mila was totally and utterly convinced. She was a horse!Eventually, the other camels were mocking her as well. Mila, like a proud horse that she was, wasn’t at all annoyed by the mockery. She only thought: ”Poor camels, you don’t realize that I am an unlucky horse, imprisoned in the body of a dirty camel. You can’t see how different I am”. From then on, Mila was completely alienated from the herd of camels and lived with the horses.

The people of the caravan, seeing that no matter what they did, Mila would return to the horses, they let her be. They even put a special saddle on her with reins!! Especially made for Mila! When the caravan was in motion, they let Mila travel with the horses. Everyone was laughing at the site of a camel with a saddle and reins. Mila was not bothered at all by all the mockery. She was  happy! A few years went by and still the people and the camels wouldn’t stop making fun of her. She started to get angry. Extremely angry!!! She just wanted to leave the caravan, but the thought of leaving the beloved horses behind was unbearable. She was obliged to swallow her anger and tried hard to be indifferent to the mockery.

One day, however, she couldn’t stand the situation any longer, so she decided to persuade the horses to escape the caravan and follow the path to freedom. Every evening the horses gathered around Mila as she talked about her dream, living in a faraway place, free of slavery and tyranny. Living far away from the dirty camels.
The dream of grazing freely, being carefree away from her masters, living in beautiful green pastures far away from the desert. She told them that it wasn’t natural to live in slavery and they were entitled to a better life…

PAULIE – THE STORY:
Once upon a time, in the far away and cold North Pole, they lived a family of polar bears. The father, the mother and the two little cubs, Polly and Molly.
The little cubs were living happily and protected by their parents and their days were filled with games and laughter.
When papa bear went fishing, he always took with him Polly, in order for him to learn to catch fishes, which was the only source of food they could find in this frozen continent. So, when he grew up and had a family of his own, he would know how to provide food, as he did for his family.
Molly stayed with mama bear in their debt, which was a big cave, hidden inside the endless ice of the Arctic. In there, they awaited the others to return and mama bear was teaching her useful things, like finding her way using the stars or the Northern Star, she told her what she would have to do when she had cubs of her own, how to clean their dent, and other things
Sometimes, they went fishing as well, since all bears, male and female, must know how to gather food. Most of the times, the males in the family went fishing, since the female’s priority was to take care and raise her cubs.

Polly was a very clever cub, and he learned all the “tricks” his father taught him. He was also a “show-off”, and he was bragging all the time to Molly. He was always challenging her in the fishing, and she rarely won.
Their parents heard all of her brother’s mockeries and they were starting to worry about the character of little Polly. Especially his mother. So, one day, he took the little cub with her for a walk in the ices, seizing the opportunity to talk to him about this matter, and to point out that his behavior was not nice.
“Every bear has different talents than the others”, his mother told him. “You are good at fishing, everyone knows that. But Molly is good at other things that you are not. Like following the stars and finding her way home. So, it’s not right to mock her for all the things she is not as good as you at, and you have to learn to be a humble a good little bear”. Those were her mother’s words and he, with a bowed head; he apologized for his behavior and told her that he would stop acting like that. He said that, but deep down inside him, didn’t feel much regret, and he made sure to mock Molly whenever their parents weren’t around.

One cloudy day of the polar winter, the family was together in their dent, in order to protect themselves from the bad weather that the parents knew was approaching…