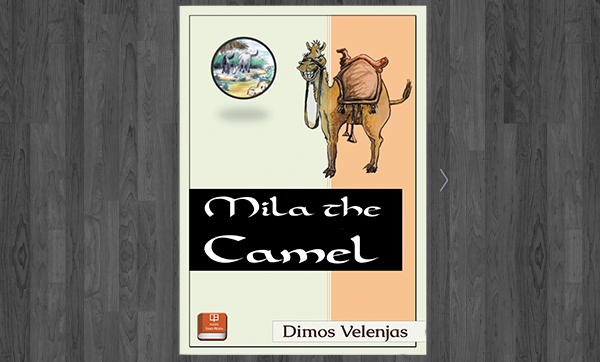 A story that will help our young friends gain knowledge -and have the first images in their minds- about the environment and the life in the desert, about the animals that live there, and their physiology. The peculiarities of each species, that allow them to be able
to live and survive in there natural environment.
A story that will reveal the power of love and compassion!
The power of rebellion and responsibility!
Of lightness and admonition!
Of error and reparation!

THE STORY:
“Once upon a time, somewhere in the far Egypt, at a caravan, lived a little camel named Mila.
From the time Mila was born, she was filled with admiration for the horses in the caravan.
She admired their beauty, built, vigor as well as their agility.
As the years went by, Mila grew, and as she grew, she felt more and more aversion for her own species while her admiration for the divine horses grew even further.
Her aversion was such that she began to believe that she isn’t an ugly, sluggish and weak camel. So she started to keep company with the horses rather than the other camels.
The horses really enjoyed her company too.
One day, one of the horses, jokingly said to her:
“My dearest Mila, you may have the appearance of a camel, but your soul is of a horse”.
That was it!!
From that moment, Mila was obsessed with the idea. She sincerely believed that she is actually a poor horse, imprisoned in the body of a camel.
For this reason, she lived with the horses.
She started to act and move like a horse. She was even taught to neigh like a horse.
After a while, the other camels didn’t want Mila near them since the only reason she would come close to them in the first place, was to laugh at them or to criticize their ugliness and weakness.
Mila was totally and utterly convinced. She was a horse!
Eventually, the other camels were mocking her as well.
Mila, like a proud horse that she was, wasn’t at all annoyed by the mockery. She only thought:
”Poor camels, you don’t realize that I am an unlucky horse, imprisoned in the body of a dirty camel. You can’t see how different I am”.
From then on, Mila was completely alienated from the herd of camels and lived with the horses. The people of the caravan, seeing that no matter what they did, Mila would return to the horses, they let her be.
They even put a special saddle on her with reins!! Especially made for Mila! When the caravan was in motion, they let Mila travel with the horses. Everyone was laughing at the site of a camel with a saddle and reins. Mila was not bothered at all by all the mockery. She was happy!
A few years went by and still the people and the camels wouldn’t stop making fun of her. She started to get angry. Extremely angry!!! She just wanted to leave the caravan, but the thought of leaving the beloved horses behind was unbearable. She was obliged to swallow her anger and tried hard to be indifferent to the mockery.
One day, however, she couldn’t stand the situation any longer, so she decided to persuade the horses to escape the caravan and follow the path to freedom. Every evening the horses gathered around Mila as she talked about her dream, living in a faraway place, free of slavery and tyranny.
Living far away from the dirty camels. The dream of grazing freely, being carefree away from her masters, living in beautiful green pastures far away from the desert.
She told them that it wasn’t natural to live in slavery and they were entitled to a better life…

”Mila The camel”, is the first of a series of adventure tales, starring baby animals.
The next to be released will be ”Polly the polar bear”,the third will be “Lara the Lama” and the fourth will be “Connie the Coala”.

The Tree of Wishes – Eleftheria Vitanopoulou