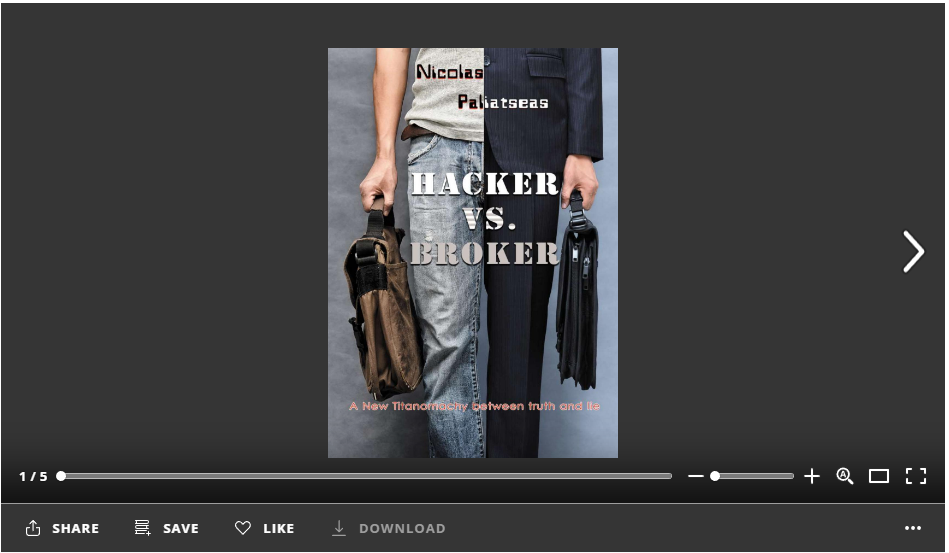 The hacker a Zeus of today, instead of lightning sends messages in all screens of the planet and calls for an Internet, peaceful revolution against the broker who is the attractor of wealth and power, the modern Cronus. A new Titanomachy, starts with uncertain outcome …Will come a fairer distribution of wealth? Will be saved the planet from ecological destruction, overpopulation and arrogance?

FRAGMENTS OF THE NOVEL
(The screen now shows young children at school. Shots are heard. The children run to escape but few fell down)

BROKER: It’s just an almost zero percentage, a tiny proportion of all gun deaths. I will neither stop the freedom nor would I reduce my profits, because someone is a maniac.

HACKER: You …for what you care isn’t freedom, but your sick ideas and profit at any cost.
BROKER: How could you …? Who, who are you?
HACKER: I used to be a golden boy, but now I became a hacker, the revolutionist of today, your enemy…I am the global consciousness, or if you want the global soul, the faith in justice, the wayfarer of truth, whose revelation only, is enough to bring your end.

MAN: Brain drain, this is how they now call emigration.
WOMAN: They all left to the North, South, East, West. We will leave now too. Others will come instead of us…

HACKER: You have brought irrevocable disasters to the planet, you’re the darkness in which at the end you will also sink in.
BROKER: It’s enough for me that my industries develop unimpededly. The technology and science will eventually heal any wound. There are no irrevocable disasters.
HACKER: You have exceeded any measure. What you are doing is hubris. The world is ill. The lakes are dried, the rivers and forests lessen, the oceans become gigantic washing dolphins and whales ashore, the glaciers melt, tar fills the coastlines, kills seabirds, fish. Radioactivity, landslides, droughts, floods. Freak weather. But the disasters will quickly come to an end. A global movement from one end to the other awakens, listens, with laws and limits will close the Pandora’s Box that you opened.

GOLDEN BOY 3: Capitalism! Yeah! Never had so much greed. History has never moved so rapidly. The many can’t defeat the few.
YOUNG WOMAN 1, escapes and cries: If your huge wealth is in danger, you won’t hesitate in gulping the whole world in a catastrophic mushroom. That’s why history doesn’t believe or trusts the person, it always wants to go with the many…the society. Always…

(The police come back and grab them. The man and the immigrant woman resist but they are forced violently, slowly in opposite directions)

WOMAN: Ah why? They’ll sent me to a place where I wasn’t born and it will be impossible to see you again.
MAN: At least tell me your name?
WOMAN: Zeinab. Yours?